⚠️
We're sorry, this campground is not currently available on Campflare. It may be first come first serve or closed. Click the link below for more info.
View on Recreation.gov

This primitive campground offers a scenic view of the San Francisco Peaks and dry camping in the cool aspen trees that surround Lockett Meadow. This is a terrific campground for those who cherish a real mountain camping experience and love to hike wilderness trails. You may catch a glimpse of the natural residents, porcupine or elk or thrill to the song of a hermit thrush that sings his best here. Even black bear have been known to stroll right through groups of picnickers without as much as a glance at their lunches.

The San Francisco Peaks are actually the remains of an extinct volcano, which mllions of years ago shattered and reshaped these great peaks, forming four of the highest individual peaks in Arizona and is home to the only region of tundra in Arizona. Inside the now quiet caldera a lush alpine environment has blurred evidence of that cataclysmic event.

The Inner Basin Trail that leads into the heart of the ancient volcano begins in beautiful Lockett Meadow. Starting at this island of emerald, which is ringed with quaking aspen stands and majestic high peaks, it leads into the mountain’s now quiet Inner Basin. The spring and summer wild flowers add a sprinkling of blue, red and yellow to the peaceful scene. While fall turns the extensive stands of aspen, which cover the steep slopes of the caldera, to solid gold, Winter avalanche tracks streak down the talus slopes exposing remnants of old lava flows which bear witness to the mountain’s turbulent heritage. 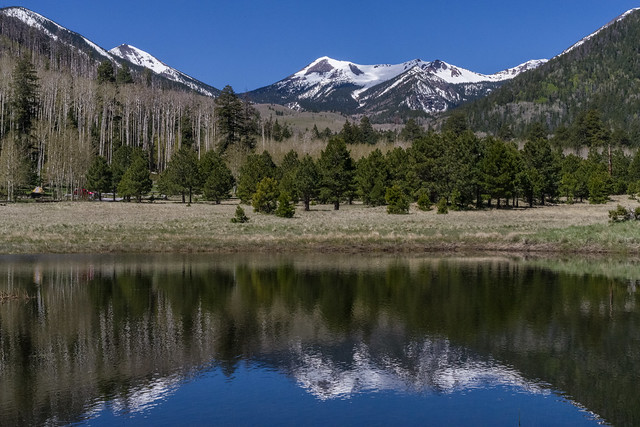 Set alerts at more campgrounds to increase your odds of getting a place to stay! Below is a list of the closest campgrounds supported on Campflare. Or, view all campgrounds in Coconino National Forest Recreation.